Recently, the Portland Guitar Duo (James Manuele and Foti Lycouridis) played some new instruments by Darren Hippner, of Hippner Guitars.  Below are pictures, comments from the luthier, and comments by the players.


Since I began building guitars over twenty years ago, I have always been trying to improve my art and produce the best classical guitar possible.  I have honed my skills by building over 800 guitars using some of the most respected designs such as Fleta, Torres, Ramirez, Bouchet, Bernabe, Santos and others.  In building these designs, my objectives were to always achieve the best balance, intonation, projection and sustain.  Besides these more traditional models, I was also very intrigued by the power, volume, projection and sustain of the revolutionary Smallman lattice braced design and how I could incorporate those attributes into the classical guitar without the use of synthetics such as carbon fiber and Nomex, while maintaining, to the extent possible, the traditional sound and Spanish character of the classical guitar.  To this end, I have spent the last two and a half years experimenting with new bracing designs and natural bracing materials that could help me achieve my goal.  During this time, I was fortunate enough to make the acquaintance of Virgil Rochester, a self taught player and guitar enthusiast.  Although Virgil had no formal training or experience in building guitars, he was also interested in how to improve the volume, power, projection and sustain of traditional classical guitar without the use of synthetics.  Besides being a guitar enthusiast, I also found out that his formal education was in field of mathematics with an extensive background in Information Technology, physics and engineering obtained during his career with SAIC, TRW, and Booz-Allen & Hamilton.

Hexrad #822
I began collaborating with Virgil on bracing designs approximately two and a half years ago, at which time he provided me with a modified, all wood, lattice bracing design, which I used to build a prototype.  The results of that build were good and it had good intonation, color, and response.  However, it lacked the power and dynamics that we were looking for.  We both knew at that time that it was time to go back to the drawing board and Virgil went off to perform research on woods for bracing material, as well as bracing designs that would, in theory, meet our design objectives.  During the next several months Virgil developed several new bracing patterns that he sent me that were far from traditional and contrary to what I had known and worked with throughout my career.  In my discussions with Virgil, he conveyed to me the purpose of the design configurations and how they would contribute to the uniform propagation of the sound waves, as well as provide balance in the basses, mid-range, and trebles.  Additionally, his bracing designs were designed to be very strong and light to increase the dynamics in the top, and thus provide more power, projection, and sustain.

Prior to my first series of production builds, Virgil collaborated with David Hunt, a physicist and metallurgical engineer, and Steve Kerrin, an engineer by profession with a formal education in Microbiology.  Dave assisted Virgil in evaluating the designs for sound propagation and stability and Steve contributed his test lab and workshop for the building of the initial proof of concept prototypes.  Over a period of approximately one year, a total of three prototypes were built to arrive at the current design.  This design was used to build the first set of production models of the Hippner Helion (or Hippner Helio-Millennium) series.  This new design has resulted in a guitar with power, response, volume, projection, sustain, deep basses and sumptuous overtones to please the most discriminating of players.

One of the models, the Helion Starburst, is currently being evaluated by Ricardo Cobo, and James Manuele and Foti Lycouridis of the Portland Guitar Duo.  The bracing of this particular model is based on a physical dynamic that most of us are familiar with, namely the dropping of a pebble into a calm pool of water and watching the concentric waves move uniformly away from the point of entry outward.  The Helion Starburst is based on this principle and provides a unique mechanism, called the "roundhouse", for coupling the bracing structure to the center of the bridge where the energy of the strings is conducted through the bridge to the "roundhouse" and outward thru the bracing structure to the sound top in a uniform pattern resulting in increased dynamics.  This provides for a rapid response with increased volume and sustain, along with clarity, separation and rich overtones 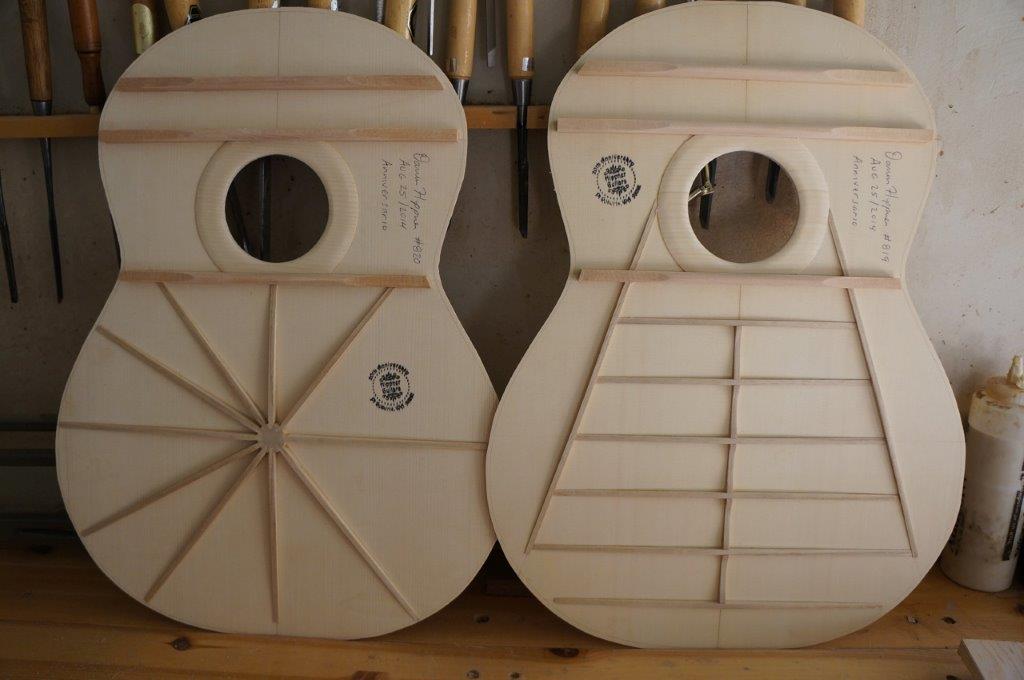 "I have played mine for a few days now and can say it is a remarkable guitar.  It is opening up every day and it has a lot of volume.  The voices are very separate, almost like a piano, both trebles and basses are clear and focused and the mid range has a complete character of its own.  It is a lot of fun playing this guitar.  It is quite different from what I usually play, my main instrument is a 1940 Hauser copy from Gary Southwell.  Yesterday we took the guitar to another guitarist and former teacher of ours, Jeff Ashton and he commended very favorably on it as well.  We plan to take your guitars on tour in California next month and showcase them as part of the concert.  We will try to play them at the April meeting of the Portland guitar society.  I also want to show them to a few more guitar players here.  Keep up the good work."

"As a concert guitarist I grew up listening to older masters such as Bream, Williams, The Romero’s, Ghiglia, Parkening and Segovia, to name a few. The sounds of Hauser, Fleta, Ramirez, and Rodriguez, were the pinnacle of a great concert guitar and I believe still are. What defines a great example of a classical guitar is subjective, although there are several factors that guitarists want or demand to have in their instrument. Classical guitarists are by far the most demanding and critical of their instrument, possibly more than any other guitar genre of players due to the history of repertoire, and the diverse color and dynamics the classical guitar can produce. For myself, very simply the guitar needs to keep my interest while music making.  My instrument must change as I play it, as a conversation will change between two people.

This new series of Hippner guitars does just that.  I have owned and played some of the great makers previously mentioned, and have found the Hippner Helio Millennium guitars retain the tradition of the old school sound, using  no carbon fiber, nomex or any other artificial material in building these guitars.

These new guitars have balance between the trebles and basses, the basses are deep and resonating not flabby which will provide clarity in voicing. The mid-range from the 7th fret to the 12th is superb, giving to a colorful G string. At times I think I’m playing a cedar top because of the fat sound being produced from the mid-range which sometimes spruce guitars lack.  The higher register is very clear with excellent sustain, having a very impressive 1st E which is a must for all concert guitarists.  In addition, these guitars have great power that carries well in a concert hall. The fundamental note is quickly followed with colorful over tones.

As a player you must change your technique and sensibility for different guitars in order to bring out their best.  Some guitars may cater to certain styles of music. These guitars sound amazing with the Spanish standards of Granados, Defalla and Albeniz as well as piano and key-board transcription of Chopin, Cimarosa, and Bach. The accessibility and intonation of these guitars are great. It is always a pleasure to pick it up and begin my warm up, and I can’t wait to start a piece. As an ensemble player with the Portland Guitar Duo, we are very excited to have two of Hippner’s new series with future projects scheduled ahead. Our sound is different and exciting.  We have decided to be ambassadors for Darren and his new guitars.  It is a very exciting time for classical guitarists to have access to new makers, and new compositions to play. Congratulations Darren on your new builds”.